Jim Hannon joined the firm in 2010. Jim previously had been engaged in the practice of law since 1973. From 1982-1999, he was a partner at Hannon & Scalzo in Oak Brook, Illinois. In 1999, he left the practice of law to become full-time Chairman at Hinsbrook Bank & Trust in Willowbrook, Illinois. Hinsbrook Bank was sold to Wintrust Financial in 2006. Jim's practice areas include banking, loan work-outs, liability defense for bank officers and directors, business advisory, corporate and real estate.

From 1987-2000, he was involved in the organization of seven community banks. Jim has served as a director of several banks. 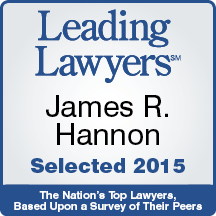